George Baird is many things to the Daniels Faculty: a graduate (BArch 1962), a long-time professor, and a former dean. But Baird's influence extends well beyond the university. A new book, The Architect and the Public: On George Baird's Contribution to Architecture, attempts to explain how Baird's conception of "the public" in architecture and urbanism impacted the development of those fields.

The book, edited by Daniels Faculty lecturer Roberto Damiani and published by Italy-based Quodlibet, is an outgrowth of "George Baird: A Question of Influence," a 2012 symposium hosted by the Daniels Faculty. The finished volume consists of 19 essays and interviews about Baird's work and his contributions to architectural theory.

Among the book's group of essayists and interview subjects are international architecture luminaries like Kenneth Frampton and Peter Eisenman. But much of the writing and talking is done by voices from closer to home, like KPMB's Bruce Kuwabara, who studied under Baird in the 1960s; Michael Piper, director of the Daniels Faculty's Master of Urban Design program; and Richard Sommer, who just completed his appointment as the Daniels Faculty's dean. 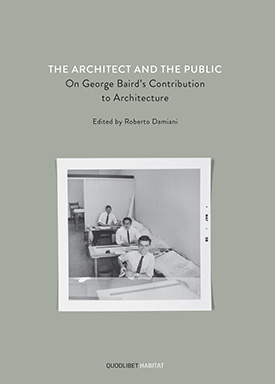 "In choosing and arranging the book's elements, I wanted to highlight Baird's intellectual commitment to envisioning architecture as a social and political construction," Damiani says. "It became clear to me that Baird's conceptualization of public space is much broader than the design of the physical environment of public streets and squares. His thinking assesses architecture as a medium of cultural representation that embodies the potential of engaging and empowering spontaneous forms of social life."

Baird has had a storied career in private practice. He's the founding principal of Baird Sampson Neuert Architects, which is known for its many public space and institutional commissions, both in Canada and abroad. Baird's early work included an influential report on design guidelines for Toronto's downtown. His firm's more recent highlights include the Old Post Office Plaza, in St. Louis, and York University's new McEwen Graduate Study and Research Building.

The book places Baird's accomplishments in context with the evolution of architectural thought during the latter half of the 20th century. "The reader will find critical references to the formation of what we now define as architectural theory," Damiani says, "as well as the transatlantic intellectual exchange between North America and Europe in the 1960s and 1970s, the development of architectural pedagogy in North America, and finally the design guidelines that shaped downtown Toronto."

The Architect and the Public is available from the publisher's website, and will soon be for sale on Amazon.