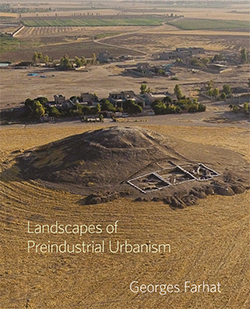 In 2017, associate professor Georges Farhat co-organized a symposium with the Garden and Landscape Studies program at Dumbarton Oaks, in Washington D.C. Now, three years later, he has finished editing a book that expands on the presentations delivered during that event.

The book, titled Landscpaes of Preindustrial Urbanism, consists of ten copiously illustrated essays by a group of multidisciplinary contributors. It can be ordered from its publisher, Harvard University Press.

The book's chapters are organized according to three technical themes — "Earthworks", "Waterscapes," and "Forestry" — which cover different types of intersections between landscapes and urbanism. Temporalities and materialities foreign to Western modernity require specific methods of analysis on each of the sites studied. To do this, the authors combine remote sensing and geoarchaeology with historical geography, ethnohistory, and ecological anthropology. The result is an open and pluralistic approach to the history of urban landscapes.

In his introductory essay, Farhat writes:

Environmental conditions, under which regional types of preindustrial urbanism formed, developed, and declined, have been lately reframed by geoarchaeology. The latter, which integrates a host of earth sciences, now benefits from larger, more reliable, or previously unavailable sets of data (from ice cores and speleothems to DNA and tree rings). It enables researchers to more accurately reconstruct paleoenvironments as well as long-term climate dynamics; to correlate environments and societies; and to retrace land cover, land use, and associated foodways.

Obviously, scholars’ interests in such phenomena are driven by a quest for solutions to current environmental crises, for which they hope to learn from the past. However, more significant for our present consideration is the fact that preindustrial urban settlements are now holistically studied as environments that can no longer be dissociated into built and unbuilt or core and hinterland areas. More important still is a rethink of human and nonhuman agencies based on archaeological finds. This has enabled historical ecology to frame a more integrative matrix accounting for the dynamics of long-term, human-environmental interactions — rather than a deterministic one-way adaptation as in cultural ecology. Entwined in such a matrix, one finds material practices of design and ecological processes. Two opposite cases, one of sterile terrain formation and the other of organic soil creation (pedogenesis), should suffice to illustrate this interaction. Semiarid plains across the world are scattered with mounds and hills (“tells”), measuring up to one kilometer across and forty meters in elevation, that once were urban settlement mounds in wetter climates. Now an integral part of their regional landscapes, these reliefs have emerged through subsequent phases of collapse, reconstruction, and abandonment. Returning to clay after melting, mud bricks formed hills that, in turn, were subject to ecological cycles. Under completely different conditions, across the Amazon, raised fields and anthropic “dark earths” accompany extensive precontact settlement earthworks and artificial islands. Vast swaths of the oft-fantasized pristine wilderness and biosphere turn out to have been human-managed forests. Their fauna and flora were domesticated, selected, and reshaped for more than two millennia into what could ultimately be described as descendants of urban landscapes.

Find out more about Landscpaes of Preindustrial Urbanism