Yaniya Lee, a sessional lecturer in the Daniels Faculty's visual studies program, was one of two guest editors of the just-released fall 2020 edition of Canadian Art, a national arts magazine. The issue, titled "Chroma," is the first one in the publication's history to be focused entirely on the output of Black artists.

Lee and her co-guest-editor, curator and writer Denise Ryner, are both Black. In their introductory essay to the new issue, they explain the conditions that led to the decision to devote an edition of the magazine to Black art. They write:

[T]he twin pandemics of systemic racism and COVID-19 have brought to the fore societal inequities that touch all sectors of life and work. The loss of a “normal” has created the potential for rapid, dramatic change. These two realities formed the environment in which Chroma was developed and assembled. 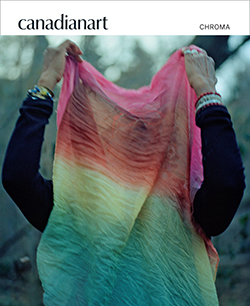 Lee and Ryner attempted to include writing about Black artists from throughout Canada. The issue includes an essay by poet Cecily Nicholson about Cheeky Proletariat, a Vancouver gallery that has become a locus for the city's Black creative community. Another story, by culture journalist Kelsey Adams, is about David Woods, an artist and arts organizer who has spent the past four decades promoting work by Black artists from the Maritimes. Another piece is a transcript of a conversation between Imani Elizabeth Jackson, M. NourbeSe Philip, and S*an D. Henry-Smith, three Black poets.

The issue even contains some direct activism in the form of an open letter from the Black Curators Forum, in which the forum's members call upon Canadian art institutions to adopt more inclusive employment policies.

Most of the issue can be read online, for free, on Canadian Art's website. More stories from the issue will be posted to the website in coming weeks.

Take me to Canadian Art