"A very distinct feature of Poli House is that it uses a lot of overlayed window openings," Eric says. "I thought that was very interesting." He decided to incorporate a similar window arrangement into his design.

Eric's two fictional occupants were a writer, who required storage space for 3,000 books, and a painter, who required a large studio space. Eric built models of his design, then began photographing and filming them. As he did so, he noticed that his overlapping window motif was beginning to suggest an unexpectedly poignant narrative. Inspired by Wong Kar-wai's In the Mood for Love and the paintings of Edward Hopper, Eric decided that his two occupants would be a married couple with a strained relationship. The writer and painter would be in love with one another, but it would be the kind of love that results in frequent fights and the need for distance. "I tried to use my building as a mediator for the relationship between the two," Eric says. 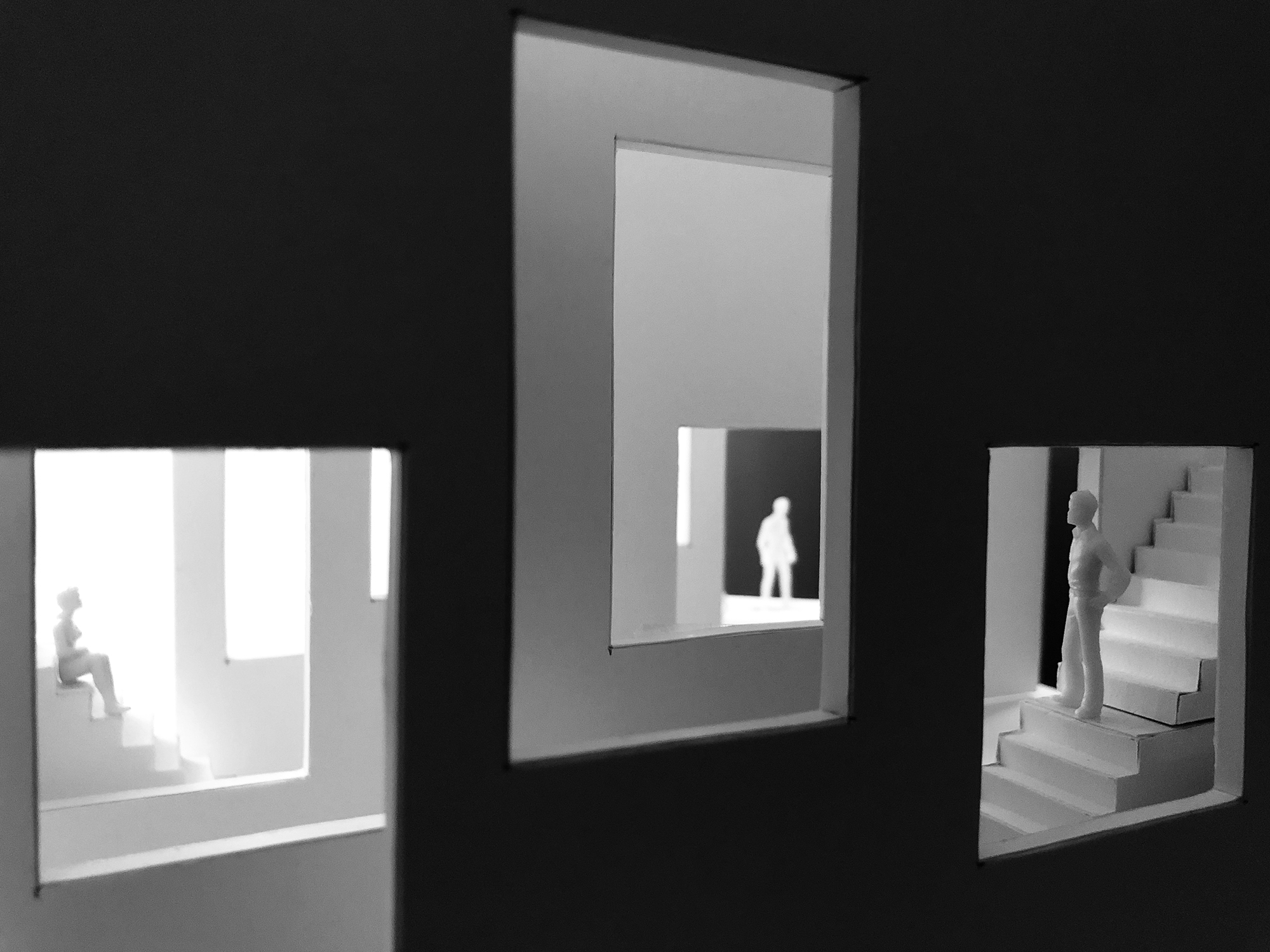 The building mediates the marriage by creating separation between the spaces used by each inhabitant. At the same time, a system of internal openings creates porosity between the separate spaces, leaving open the possibility of reconciliation. 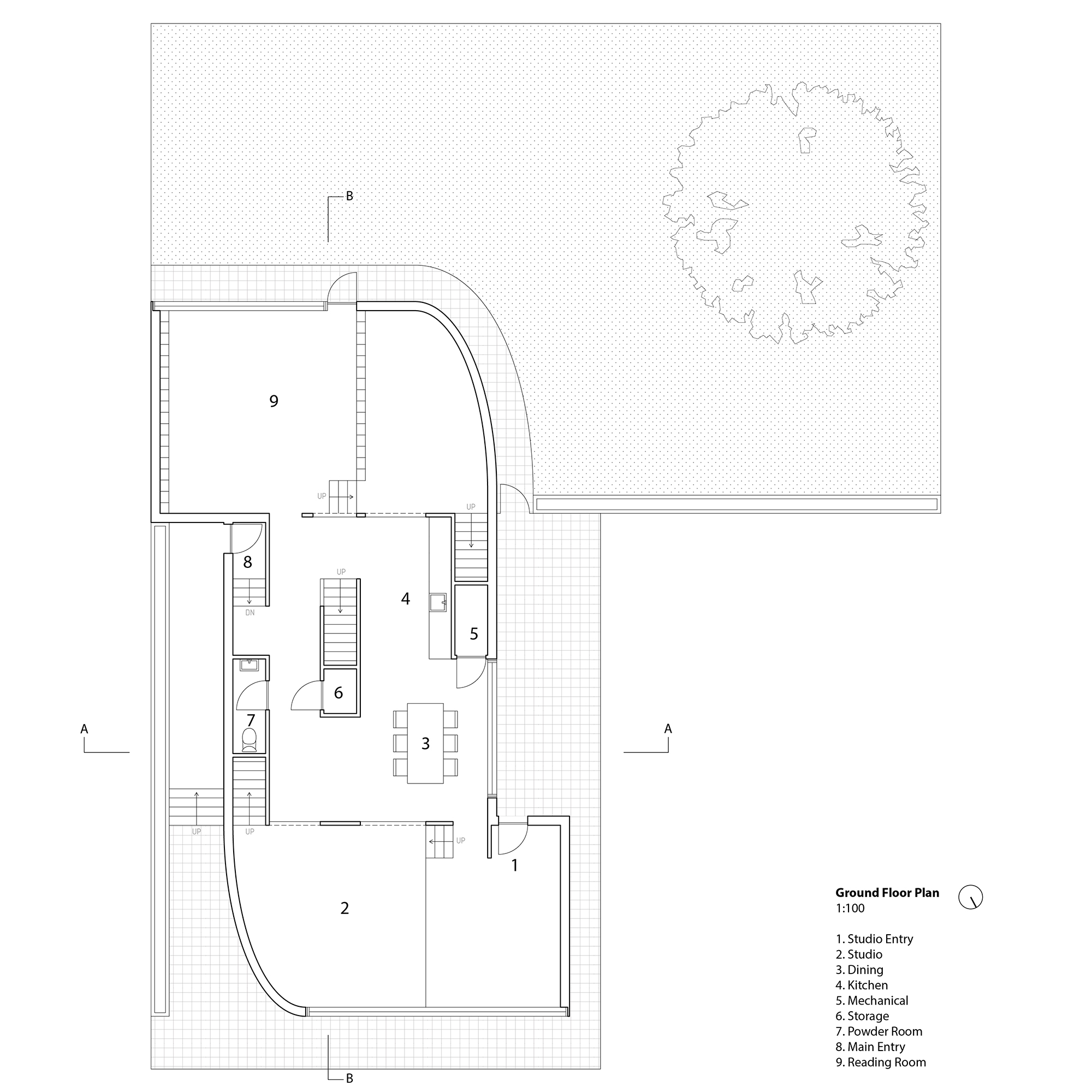 On the ground floor, the painter's studio and the writer's reading room are situated on opposite ends of the house. Each space has a set of internal windows that look out into a common kitchen and dining area. 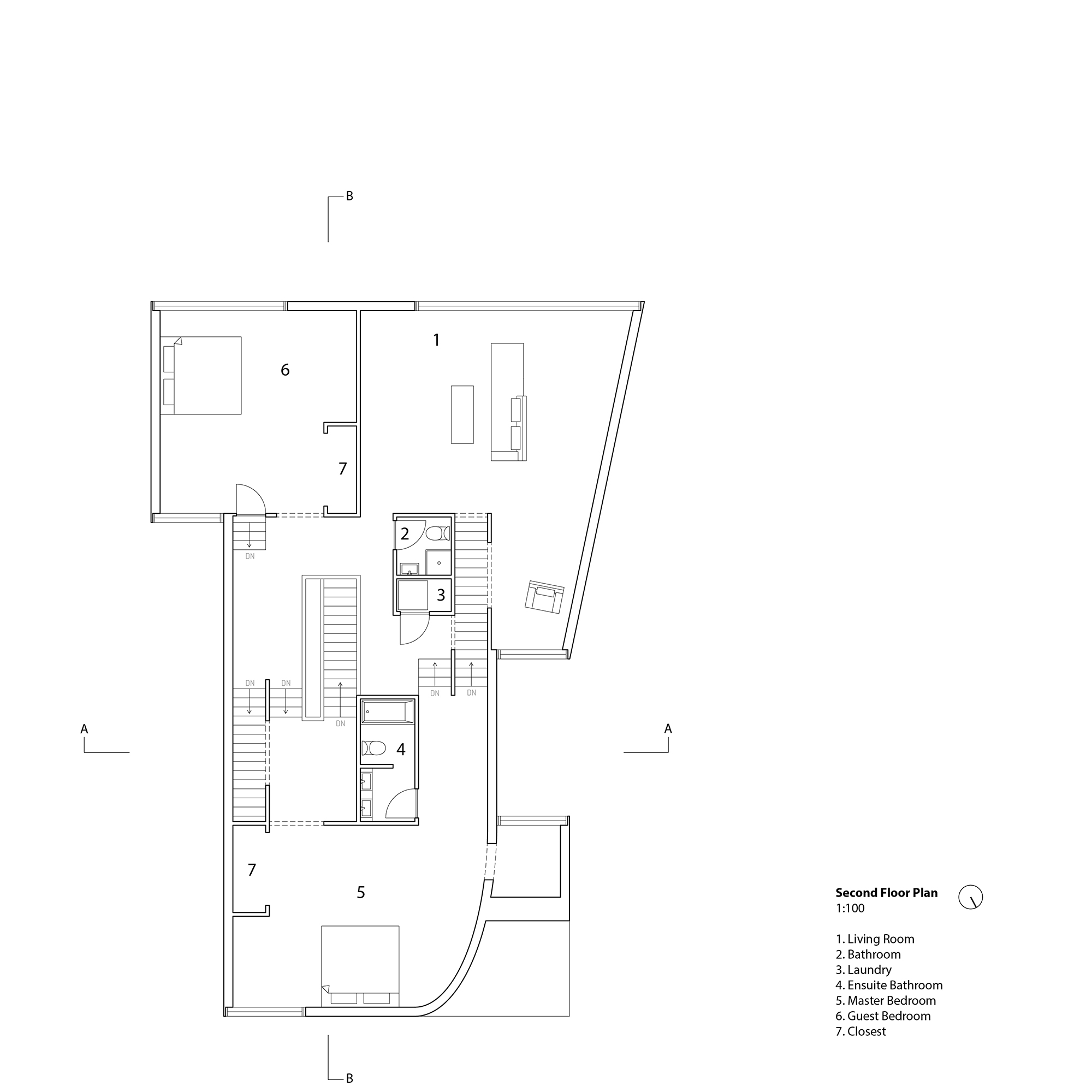 The pattern repeats on the second floor. The home has two bedrooms located at opposite ends of the floor plan. Internal windows allow both occupants brief glimpses of each other, even when they're sleeping separately. The semi-separation extends to the home's circulation. Each bedroom has its own staircase. The occupants can choose to avoid each other when transitioning between floors — or, in friendlier times, they can use a shared central staircase. 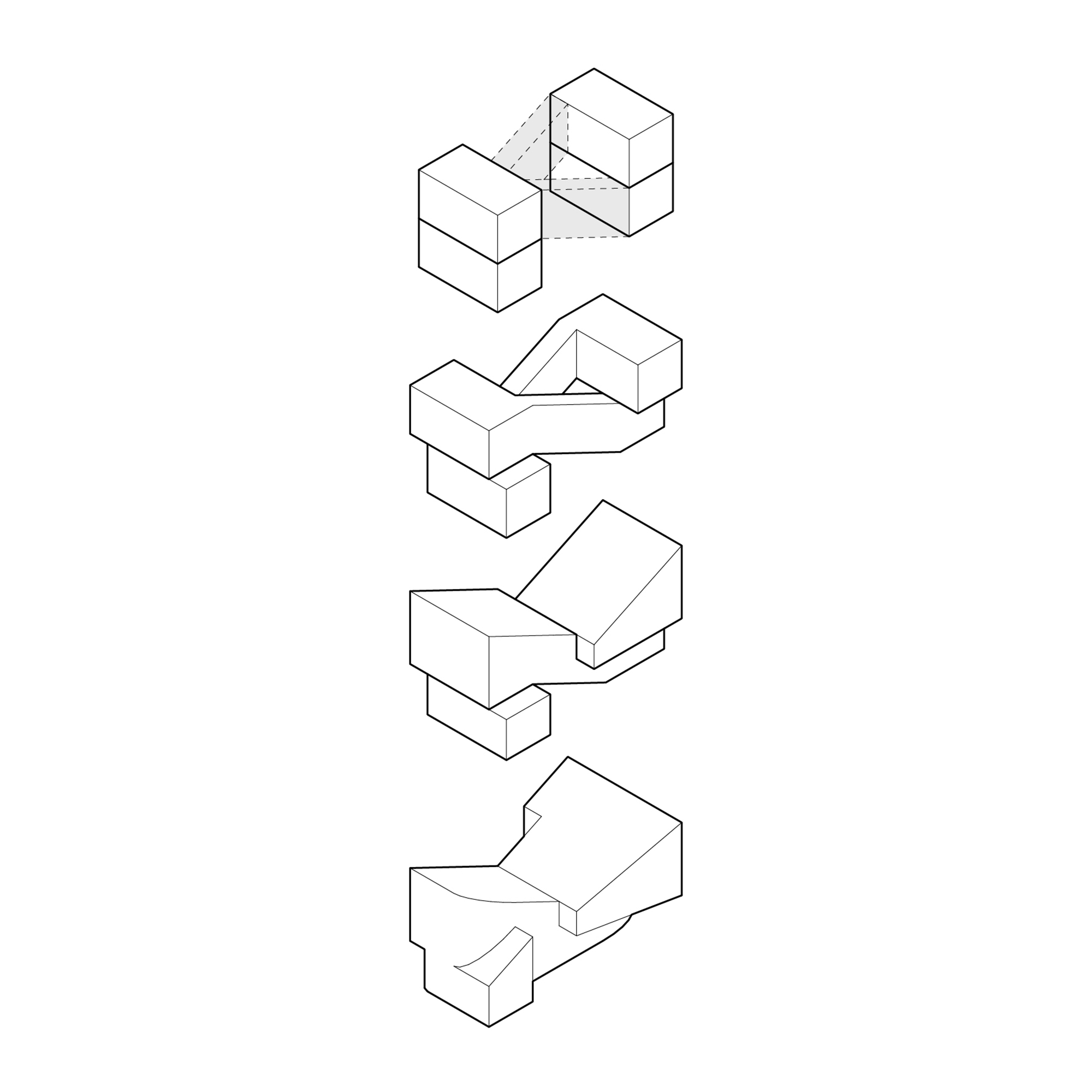 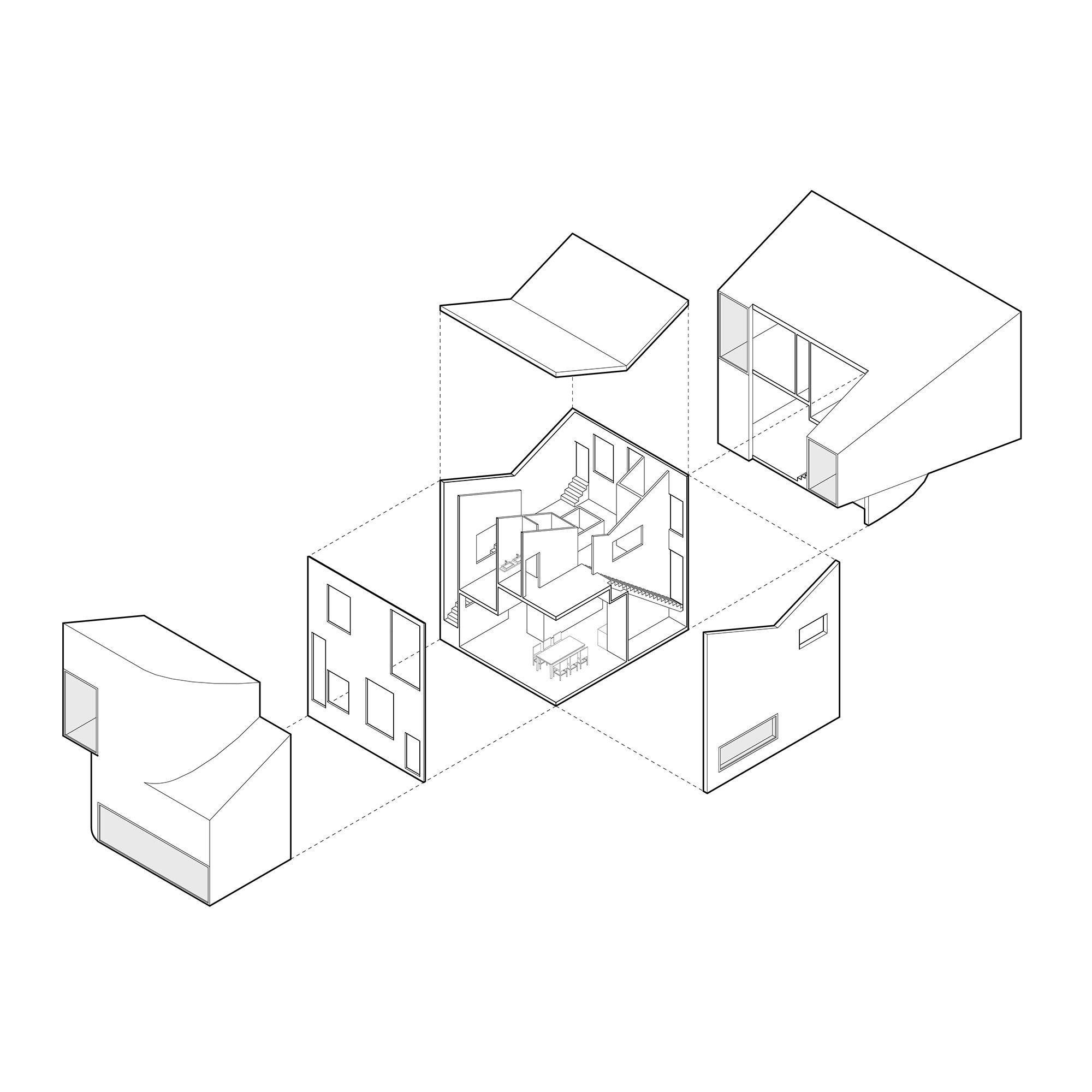 The themes of separation and mediation are also built into the home's exterior. "The form is two volumes merged, intertwined into one," Eric says. "It feels united, but you can see there are parts that are separate. That's kind of a metaphor for the occupants' relationship. They're living together as a couple, but they have distinct characteristics."